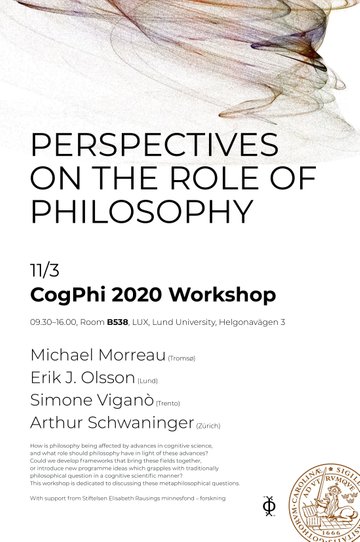 How is philosophy being affected by advances in cognitive science, and what role should philosophy have in light of these advances? Could we develop frameworks that bring these fields together, or introduce new programme ideas which grapples with traditionally philosophical question in a cognitive scientific manner? This workshop is dedicated to discussing these metaphilosophical questions.

The two-day workshop will strive to promote new writing collaborations between researchers at Lund University and the University of Zurich (UZH), as well as to inspire future cognitive philosophical events both in Lund and abroad.

An overarching goal of the workshop is to provide the groundwork for cognitive and mind-centered explorations and explanations of natural phenomena, such as knowledge, perception, thought, and the mind itself, which predominantly have been discussed in philosophical contexts without the modern discoveries that have been made about how the brain operates and creates our experiences and concepts.